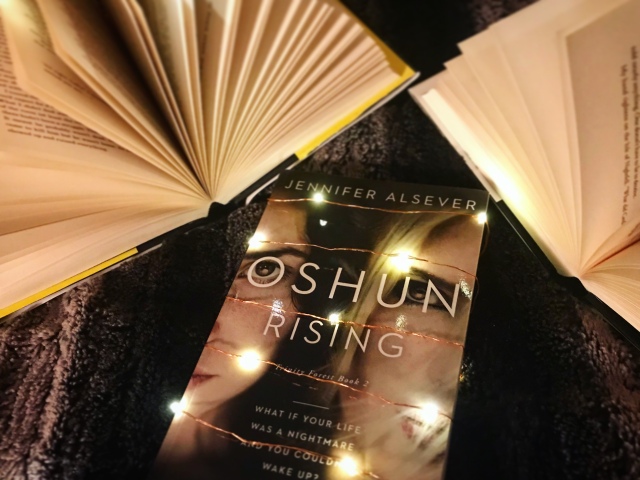 OSHUN has everything a young pop star could ever want—fame, fortune, and beauty to spare. But there’s something dark inside of her, rising like the tide, fighting to be heard. Something that terrifies her. Because once she lets it out, she knows there’s no going back.

EMBER is drowning. Fighting for consciousness, struggling to make sense of the strange dreams she’s been having—prophecies of murder, deception, and blackmail. But once she begins to untangle them, she realizes that they might not be dreams at all…and if she doesn’t find a way to stop what she’s seeing, more people will die.

MADDIE is barely staying afloat. How can she be expected to care about school when her best friend Ember is still missing, presumed dead? So when Ember’s brother calls and tells her about his theory about a pop star who may be involved in Ember’s disappearance, she rallies him to take a road trip to check it out.

I received this book in exchange for an honest review.

This book was a bit of a happy surprise for me; I liked it more than the first book in the series (Ember Burning), and that book was a pretty easy and fun read in itself.

There were some iffy parts, which I’ll describe now so I can get on to the nice stuff.

This was still a little stilted occasionally, some things the characters said I wasn’t really sure if they sounded how people actually speak. I think if this book was made into a TV show or film, some of the dialogue would have to be edited to sound more realistic.

For example, some of the character voices were made to be a little bit stereotypical, or what I assume the author thinks of as ‘teen speak’. Things like ‘smokin’ hot chick’ etc.

These took me out of the story a little, and made them sound a little less genuine to me.

There was a little bit too much telling rather than showing in exposition. For example: ‘You read that diary on us that Ember had that used to be her mom’s.” Usually people don’t put that much information in if they think that the other person will get what they mean if they just say “the diary”.

This happened a few times in the book, sometimes I think just to forward the plot, as there was already a big ominous unexplained ‘dark day’ thing that was mentioned a LOT for something that we were clearly never going to get an explanation for. Therefore maybe the exposition was needed just so not everything was kept a mystery.

But even so, I would have still liked a lot more ‘show’ in the writing. It would have made it feel more like I was in the story and less like I was having someone explain the plot to me in a reasonably descriptive way.

Anyway, now onto the things I did enjoy.

Sometimes with a mystery based plot, a multiple POV can just be frustrating when some plot points are revealed in one but then are painfully slow to be revealed in another. This just makes me want to skip a bunch of pages until it’s finally revealed, so I don’t enjoy reading it as much.

Oshun Rising didn’t have that problem for me. It allowed some snippets of plot in one POV, while keeping the others close enough to figuring it out that I was happy to stay in suspense. It was also nice to see Ember’s best friend’s point of view, since we barely got to see her in the first book in this series.

We actually get to see her bond with Ember and Ember’s brother’s love for her, making her disappearance in the first book finally have the jolt of sadness to it that it was missing the first time around.

Evil side of things:

I still didn’t quite understand what was happening during the ‘rebirth’ process, but this time it had more of an external viewpoint and a bit more detail, so it really felt like a ritual as opposed to a confusing event.

Also the antagonist of the series had her own viewpoint, which added to the horror feel of things by allowing us to actually see how unfeeling and remorseless she is in regards to our characters wellbeing.

Overall, the plot was more interesting, complicated, and mysterious, there was a little more risk involved, and I was more hooked with this book than I had been with the previous. The only way is up!

[A new thing this week! Enjoy a guest review by my sister!]

So first let me take the opportunity to introduce myself as Guest reviewer this week – I’m Sarah (sarah-n-dippity on Tumblr), I’m a Hufflepuff (Did you know we’re extremely good finders?) and I look remarkably similar to the original ‘one-and-only’ Always Bookish Becka (but only in like…the face area, and the everything else area)

Nice to meet you all – and I hope you don’t mind me taking over for one quick review of the lovely and amazing book Solitaire by Alice Oseman.

In case you’re wondering, this is not a love story.

My name is Tori Spring. I like to sleep and I like to blog. Last year – before all that stuff with Charlie and before I had to face the harsh realities of A-Levels and university applications and the fact that one day I really will have to start talking to people – I had friends. Things were very different, I guess, but that’s all over now.

I don’t know what Solitaire are trying to do, and I don’t care about Michael Holden.

Now I don’t tend to give things star ratings, but if I were to put a couple of shiny ones on this I would probably chuck about 4 on out of a total of 5. It was a very gripping read with good character building and a captivating (if a little frustrating) MC.

What I liked about it:

1. The author really got what it’s like to be in a period of depression, especially when there’s someone close to you who is seemingly ‘worse’ or with a ‘more urgent issue’. The main character was second guessing the opinions of the other characters all the time (she couldn’t be broken, this was just who she was!) but at the same time she knew something was off, she just couldn’t put her finger on what it was. Also you could tell she didn’t want to overshadow the other people in her life who had their own difficulties – or burden them with her own.

2. Alice Oseman really understands teen voices – the slang, the speed and cadence of the phrasing, the way that most of the time no-one actually says what they’re thinking, they just heavily imply it. It really (and sometimes scarily…) made me remember just what it was like going through that period of school and how sometimes even in the biggest of crowds you can still feel entirely alone.

3. She doesn’t forget about the side characters – and fleshes a lot of them out with issues of their own, sometimes using this to show how inside her own head Tori has gotten, and how much external stuff she misses.

1. (This may be because I have read her other books more recently) The diversity in this book is severely lacking, and although there are some LGBT characters it’s all in a setting of ‘whiteness’ that can date this book a bit considering the huge number of racial and sexually diverse YA books out there. It doesn’t pull from the amazing story but it is a little fluffy grey cloud hanging over it.

2. A lot of the storylines are left hanging – for example we never really have Tori confront her friend Becky (outside her depressive state) about who she is dating, and how that person has negatively affected her brother. We also never see Ben Hope again after the time Tori yells at Becky, which seems a little anti-climactic, and we don’t fully see Charlie’s reaction to the whole thing other than brief mentions of his injuries. It all feels a little like the last chapter of the book is missing – despite the rest of it being so powerful. Also the parents seem like cardboard cut-outs compared to the rest of the characters, nipping in to tell Tori to ‘cheer up’ before heading off to…something. I’m still not sure what either of her parents do for a living.

And those are the reasons I just couldn’t give this book a full 5 star rating – although for a debut book written by someone who was a teenager herself when she was writing it, it’s shockingly deep and mature with an innate understanding of how people work and interact with each other.

I think if you’ve ever felt out of place – or struggled with depression yourself – then this is a good book to read. It’s interesting, and thoughtful, and it’ll definitely stick with you (I should know, I’ve read it multiple times, which is huge for me!) and with enough mystery to keep you going till the final shocking – yet satisfying – pages.

Anyway, give it a go, and I hope you enjoy it. I’m off to ‘find’ a nice cup of tea to warm my little frozen finger-cicles after being blasted by the super strong air-con in this office.